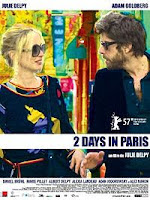 A friend kindly took me to see '2 Days in Paris' the other day and I must say I laughed out loud - excellent movie.

Many people that have seen the movie haven't like it much, probably because most people that go to see films about the French seem to like the French. I personally have very little time for the French culture with its whingy, whinny, socialist tendencies - 2 Days turned out to be perfect for me.

The story revolves around a French/American couple who stop for 2 days in Paris to meet her family - cultural and language differences make for the most amusing viewing.

Another reason to rush off and see 2 Days is to view another great performance by Adam Goldberg. Goldberg would have to be one of my favourite actors and one we don't see enough of in main roles, although he seems to keep busy none-the-less. Julie Delphy wrote, directed and starred in the movie - which sounds awfully clever and probably is.

Labels: Movies, War of the Sexes

When I first started down the road of political enlightenment - nearly 15 years ago now - I had a conversation with Lindsay Perigo about the increasing taxes on cigarettes and alcohol. At the time Lindsay said that butter and coffee would be next. I inwardly scoffed (too scared to do this outwardly of course) and thought 'what is this guy on'? Made a comment to the effect that Nanny State would never get this out of line.

Well it appears that I owe Mr Perigo a huge apology (bottle of red on it's way). It appears that I was totally ignorant of how far Nanny and her servants are prepared to go, in fact the controls are turning into a Tsunami - ready to swamp us and smash what remains of our freewill to death - I think it has become unstoppable.

Secretly I hope that Labour win a further term. Why? Because Labour will continue on, at an ever increasing rate, to take control of more and more facets of our lives. Maybe when we aren't allowed to freely eat butter and drink coffee, will the populous stand up in enough numbers and say fuck off. Cause at the moment they are just saying, 'please Mummy Clark, please tell me what to do, I am so useless and stupid I can't possibly manage on my own'.

More on this when I've calmed down - christ I'm pissed off - and most pissed of with those that voted for this. What the hell are you thinking - oh I forgot, thinking is just too hard for your poor wee brains. Don't panic just look over your shoulder - there's Nanny no need to think anymore.

Remove the Red Tape, the Fibre Optics will follow

Yes, National is right, we do need better broadband coverage in New Zealand, and yes they are right, Telecos are reluctant to upgrade the telecommunications infrastructure. However the solution is not more government intervention it is less ... way less.

We need to look at the reasons why private equity is not flowing into our infrastructure (telecommunications or otherwise). All business decisions ultimately boil down to risk. With infrastructure the main risk is political risk. There is a real fear amongst our business leaders that the government, with a stroke of a pen, will steal assets by nationalising them (in full or in part) or with another stroke tilting the playing field and vamoose, profit is gone. Taken by those that - on average - couldn't make a profitable decision to save themselves.

National just needs to do the following:
1) repeal the Resource Management Act. I know it's hard to admit when you are wrong, but this monster of red tape has morphed into an unholy mess of corruption and is strangling the very heartbeat of the New Zealand economy.

2) once they are in power, remove any legislation that doesn't provide a level playing field and swear that they will not pass any further legislation that restricts our businessmen and their activities.

3) show a strong commitment to private property rights - stop stealing from NZ businesses and from its citizens. Talk about it at every opportunity. Replace the word 'sustainability' with 'property rights'.

Do this and entrepreneurs (Kiwi or otherwise) will have the confidence to invest and infrastructure concerns will be a thing of the past.

The complete lack of business nous is understandable if we were talking about Labour or the Greens, but the National Party? It's just plain unbelievable.
Posted by Annie Fox! at 2:19 pm 1 comment: 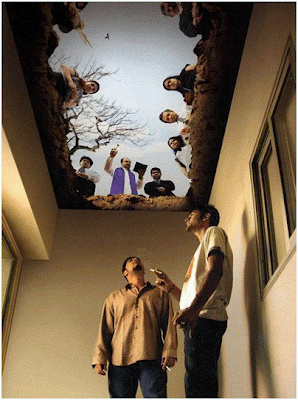 Many years back (1979) there started a campaign called 'Plain English', which was an attempt (and reasonably successful I think) to present the English language in, well, Plain English. Corporate speak, jargon and just general bullshit was to be banished from the spoken and written word.

Lawyers, academics, politicans, public servants, corporate employees and the general public were encouraged to keep it simple and to simply 'cut the BS'.

Here's an example I found on ShareChat from the departing Elaine Campbell "My tenure as head of market supervision can perhaps be characterised as one of building the capacity of NZX as the front line regulator of its markets, and bringing to our performance of that role public accountability by ensuring transparency in our decision making". I wonder if she ever notices eyes glassing over when she speaks.

The Plain English Campaign website provide some fine examples of what the poor public has to put up with:

Before: High-quality learning environments are a necessary precondition for facilitation and enhancement of the ongoing learning process.
After: Children need good schools if they are to learn properly.

Before: Your enquiry about the use of the entrance area at the library for the purpose of displaying posters and leaflets about Welfare and Supplementary Benefit rights, gives rise to the question of the provenance and authoritativeness of the material to be displayed. Posters and leaflets issued by the Central Office of Information, the Department of Health and Social Security and other authoritative bodies are usually displayed in libraries, but items of a disputatious or polemic kind, whilst not necessarily excluded, are considered individually.
After: Thank you for your letter asking for permission to put up posters in the library. Before we can give you an answer we will need to see a copy of the posters to make sure they won't offend anyone.

A fun pastime is to challenge those that use jargon, corporate speak and general 'gobbledygook'. Ask them what they mean in Plain English, half the time they have no idea, they simply parrot their colleagues and have been too proud to admit they don't understand the words themselves. Sometime their complete lack of comprehension leads them to mock you for your 'ignorance' - hehe, you know you've got them then.

Most crimes against Plain English is, more often than not, composed by the public servant. A person who has forgotten who they work for and have morphed into the ugly bureaucrat.

So we need a new campaign, one that smashes Red Tape, stifles Bureaucrats and gives us back our oxygen. Just have to think up a catchy name ...... uummmm!

A side battle of this campaign should be to discourage our children from taking government jobs, and if they do, to understand that they should be a benign public servant, not an aggressive blood sucking parasite.

A friend of mine emailed this to me:
".... I ask 4-year old* if she would like to go and see 'The Princess and the Pea' at the theatre, and she asks 'Does the princess pee on stage?'.

Then I ask husband* if he would like to take daughter to see 'The Princess and the P' at the theatre, and he asks 'What, is it about drugs?'

Don't you love the English language.

* Names obscured to protect the very young and the very stupid.
Posted by Annie Fox! at 10:39 am 3 comments:

Finally caught up with the weekend papers and spied a great Sunday Hearld column by the charming Kerry Woodham titled "Up yours, Greenpeace".

I too was a member of Greenpeace in my youth - not entirely sure why now, but it probably had something to do with my brain dead vegetarian years, not entirely sure why I did that either. Funnily enough all coincided with my socialist period - thank god I've got an excuse for embarrassing lapse in rationality - obviously not enough braincells to think clearly.

Anyway, the other day a Greenpeace lass knocked on my door to try and pry some hard earned dollars out of my wallet. I informed her that I was an atheist and didn't subscribe to groups that live in laalaa land - just ones that base their views on rational thought and evidence. She said that Greenpeace wasn't a religion, but I begged to differ.

She then asked if I wanted a "better world for my children". Was initially taken aback that I looked like I might have children - in her defence I was wearing my trackies so she can be excused for thinking so. "Yes" I said "I do want a better world for my nieces" and that was precisely why I wouldn't support Greenpeace or any other environmentalist organisations. It is the very people that Greenpeace attack that make my world, this world, a beautiful place to live in. They provide me with light when it's dark, food when I'm hungry, movies when I'm bored, champagne when I'm celebrating, chemo when I'm dying, planes when I'm in the mood to view this beautiful world. They also provide me all the necessities that allow me to do the job I love - books, computers, software, internet, financial markets, the cup that holds my tea and the tea itself.

The policies and aim of these environmentalists are no less than a desire to turn man back into animals, scrambling around in caves, or at best eking out a meager existence on a farm. This world they desire would mean millions upon millions would stave to death, and they would be the lucky ones. The rest would live a short and miserable existence in a truly malevolent world. A world that would kill me and my nieces and all future generations of my family. I would no sooner align myself with the green movement as I would the Ebola Virus.

The day that the greenies advocate for nuclear power is the day I might (might, I add) start to listen to them. I think it's safe to say that day will never come.
Posted by Annie Fox! at 4:32 pm 2 comments: