Yesterday I headed up to the bach for Queens Birthday weekend. With me came four Monarch Caterpillars to be replanted on the swan plants that are all over the property.

Replanted them in a nice sunny spot and wandered around to check out the caterpillar population on the other plants. To my delight I found a big fat juicy one, hanging by its bum, ready to turn itself into a chrysalis. Returned half-an-hour later to find it was half way thru the process. It was so amazing, the speed of the transformation is so fast, you can watch it happening. So I stood there for about 10 minutes watching the magic that is nature. He wiggled and jiggled and with great effort he shed his furry skin to reveal a green slug which was partly chrysalised. It was truly an amazing event to behold when horrors-of-horrors he fell – splat on the ground – dead instantly. I was mortified – I felt a mother losing her child – I was devastated.

No wonder the Monarch Butterfly are supposedly* struggling for survival. All that effort for nought.

* Personally I see Monarch Butterflies all over the place, so wonder about this shortage report.

Watch the first 4 minutes of the latest episode of Media 7. Ha, ain't that the truth. 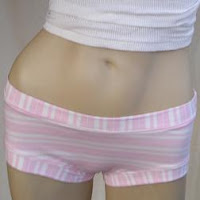 I just spent a lovely long weekend in Nelson with my dear school mate and her hubby. Great region of New Zealand and I can list numerous wonderful places to go in the Nelson area - one of the best place is the Saturday Market.

Here I found this wonderful underwear! They are just fantastic with jeans and they don't move anywhere all day - brilliant. They come in full brief and hipsters and available online.
Posted by Annie Fox! at 1:02 pm 2 comments: 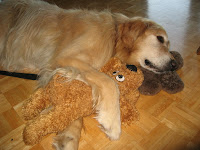 Back in July last year I posted about my parent's dog Boss who was making life difficult for me (and the rest of the world) when I was living at home for a period.

Well his behaviour hadn't changed one iota since and on the food/biting front, he was actually becoming worse. The lasted incident was a rather scary attack on Dad - blood was drawn, bandages were applied, doctor was sought. Dog got away with it scotfree. Don't get me wrong, he's a beautiful dog, who is lovely to be around 99% of the time. But he does manipulate the folks and doesn't know his place.

Anyway in the interests of harmony and fear that he might go at the girls one day, I decided that a Dog Whisperer (DW) was required. So on Tuesday I headed over to Mum & Dad's for a group lesson. Just like on TV Boss knew that DW was the real boss and she had control of the house instantly.

We did lots of role playing around the issues that we have with Boss and learnt what we were doing wrong and how to train him - super fun. The feeding bowl was the real problem, Dad showed DW how he feeds the dog, which meant grabbing a dog biscuit and throwing it at the bowl from a distance of about 3m - very funny.

During this lesson Boss broke into his rage and surprisingly went for DW, but more surprising, she just took her hands out of way, stood on his lead and commanded that he lay down. He kept trying to attack, but finally submitted - huge respect DW.

It was a great couple of hours, we learnt so much about how to control him and move ourselves up the pecking order. As you can imagine the easiest way was via food treats - very effective when you've got a golden retriever. Training him will be great fun, just have to make sure Dad (the big sook) doesn't let the side down.

So if you are visiting M&D, just knock on the door, give them time to arrange the dog, wait to be invited in and simply ignore Boss, don't touch, don't look him in the eye. You can say hello later, he just has to know that he is the least important thing in the room.

So Boss is no longer be my nemesis! I'll just have to find another.

BTW: I tried the training techniques back home on Foxy the cat - doesn't work!
Posted by Annie Fox! at 1:40 pm 3 comments:

Yes I'm still very much here, have been offline due to a painful neck & shoulder - made more painful the more horizontal I got - thus sleeping became impossible and no painkiller seemed to work for longer than a day - never a night. Physio has been helping me for the last month and GP prescribe Pethidine and the pain is now bearable and sleepable. Anyway Oncologist suggests I have an MRI to check the cancer hasn't moved into the bone. I don't think this has happened, but it will be good to know for certain.

Anyway on a more positive note, today represents one year since my grandmal brain seizure, at the time I had an expected survival time of approximately 6-months, this estimate didn't improve when the chemo failed. Brain radiation was the next treatment and that seems to have done the trick. So one year means I can now legally drive again - must say totally ridiculous law banning me for a whole year. Epileptics and even Narcoleptics are allowed to drive as long as they are on medication - I'm as likely to have a seizure as you are, and you haven't even had the reassurance of a brain CT. Making blanket restrictions on patients isn't particularly productive, surely this should be a decision of the doctor and as I have proven each time I've been treated, I've outperformed each expectation. Some people just respond to treatments better than others.
Posted by Annie Fox! at 11:38 am 6 comments:

They once said that a black man would be President when pigs flew.

Don't forget it's drinks on Thursday night at Galbraiths for the monthly B3 Bloggers Bar Bash. See you there from 6.30pm onwards.
Posted by Annie Fox! at 1:04 pm No comments:

PJ: He came, we heard, he conquered 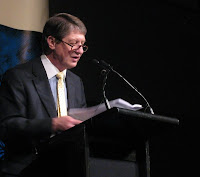 I sit today in the hills of Christchurch watching the clouds sweep in and the rain fall - arh true bliss. Mind you rather cold down here - ekk not nice - but no one dies of the cold right?

Anyway I sit in a friends lounge which is probably the warmest spot known to man - fantastic. I'm visiting for a long weekend and struggling to stay awake after only four hours sleep in the last two nights - reasons?

1/ Sore neck that doesn't like it if I lay down or sit up or stand around or anything for that matter. It likes it if I go for a walk or make muesli at 3am or for reason #2 ....

3/ Late night with PJ O'Rourke - thanks to the CIS team, wonderfully organised.

Mr O'Rourke didn't fail to amuse all, he really is the most entertaining and long serving satirist in the world. At some point during the evening he commented that he doesn't have the intelligence that the great economists have. But to reduce a concept down to its core, add current events and brilliant observations, mixed it all together with fine humour shows a massive comprehension and fine intellect. As all writers can attest, it's hard enough doing the first, adding humour without sounding like a bitter fool makes it nigh on impossible.

PJ has the skills to point out a person's stupidity/weakness/hypocrisy, create a brilliantly revealing and entertaining story as to why, and then make us all laugh, hoot and cheer - but here's where a special talent is exposed - the victim of the humour will be laughing along with the rest of us (the Topp Twins and Jon Stewart seem to possess this skill also), very cleaver.

PJ's skills are highly useful in an era where the majority of the population possess little to no concentration skills. If you can reduce a concept down to a few words or sentences, then make them memorable by injecting a huge dose of humour, then you're there.*

Later in the evening I had the great pleasure of talking to the honoured guest face-to-face, which was all a little overwhelming. I've never meet anyone that I really admired before, it's hard to think of what to say and you forget every question you always wanted to asked - really you want to just grin and say 'you're fantastic' - over and over again. But we did talk about 'The Troubles' that we have both experienced - the fact that he has flown half way around the world for a grueling media fest in both Australia and New Zealand is to be admired. I would have to take the rest of the year off. 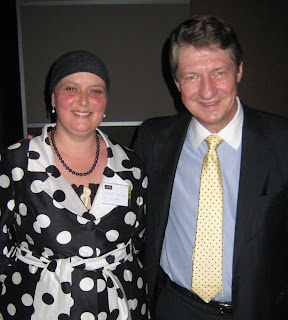 Of course the Libertarianz were beside themselves that we had tables right in front of the stage and like a bunch of kids we had grins from ear-to-ear. At the first opportunity we pinned him down for a group photo. 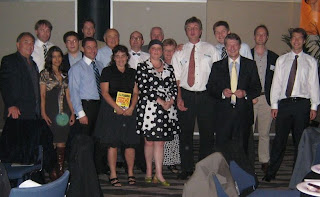 * Lynn Truss taught me more about grammar in one evening with Eat, Shoots & Leaves, than I learnt after 13 years of education. Mind you 'chemo brain' stops me putting this into practice - that's my story and I'm sticking to it - I can get a doctors note if you don't believe me. Bill Bryson inspired some kind of interest in the English language - over and above pig ignorance - with Mother Tongue, as well as bringing science to the masses with A Short Story of Nearly Everything. All this via humour.
Posted by Annie Fox! at 12:52 pm 2 comments: