Yesterday we had a big working bee at home to get the landscaping finished in double quick time. At one point we had 25 workers and the whole place was finished and looking fabulous by the end of the day (photos to follow) - a bit like Mucking In, but without the cameras. We just need a new fence built and then we can lay the grass and finito - wonderful!

Thanks soooo much to all who helped, both Emilija and I very much appreciated the energy exerted and the time sacrificed on our behalf. Especially big brother Allan, who helped us buy the plants, plan the whole thing and organise the troops, mammoth effort all round - we love you all.

Hope you enjoyed the food & drinks, you were here so late we must have done something right. Also hope you aren't too achy today - I know I am and I didn't even do anything.
Posted by Annie Fox! at 4:36 pm 9 comments:

The little things that really piss me off!

My brain function has changed somewhat - I get flustered very easily, which I suppose isn't that unusual for me, but I now rave every time it happens. Poor Emilija has to listen to me rave at the TV all night - suppose it has its humours moments, but when I start to repeat myself that I get worried. Maybe I've got torettes :o)

But I thought I'd share with you some of the things I've been raving about for the best part of two weeks - all very minor really, but hey they're always the most annoying aren't they ....

Median Strips: The median strip is designed so drivers that are turning right across the road can sit whilst they wait for a gap in traffic. Too many of you pull into it at the last second, leaving your butt sitting out in the left lane so no one can drive past. Don't do this - it's really bloody annoying - start moving into the median strip as soon as you start to slow down (yes you are allowed to). Then you are out of the way and traffic doesn't have to slow down for you and in many cases stop.

Indicating: New Zealanders (particularly Aucklanders) just can't seem to indicate to save themselves and the ones that do only do so for a maximum of 1-second. They seem to be of the opinion that other drivers are psychic and automatically know what their next random move will be. Mind you having psychic ability wouldn't help much as there rarely seems to be any conscience thought granted to their driving. For your information you are meant to indicate for a minimum of 3-seconds. And for the record, no I don't believe in psychics.

Net curtains & blinds: Everywhere you look there are net curtains or blinds or curtains blocking out all the sun, so houses are damp and smelly. Please open up your houses let the light in and live healthy. No wonder we suffer from Asthma and mouldy houses. Stuff trying to insulate all the houses in NZ - just let in some healthy sun each day and fresh air and we'll save the taxpayer 1-billion dollars. And that's another thing that pisses me (and housemate off), we've just spent a small fortune on insulation and heating for the house and now we have to pay for the every other blugger to have their houses done. At least by dying I won't have to pay for anymore of this kind of crap (see it is torettes) and most of the rest of you support either Labour, National, NZ First or Greens so it serves you right - you voted for it.

Privot: You see it everywhere - especially on Council and Transit NZ land. This is a weed, it spreads like wildfire and smothers any plant or forest it grows near. It is not suitable as a hedge and it is not an attractive tree for your garden - kill it.

Toothpaste ads: I don't know why - they just really, really annoy me. And they must all use the same advertising company.

Kissing pets: They seem to have stopped showing owners and pets touching mouths in adverts, finally. But why people kiss their pets or let their pets lick them is beyond me - surely they must know where their pets mouth has been. If you do this vile activity you should be required to have a warning tattooed on your forehead, so I can avoid kissing you.

I'm sure there's plenty more that I've temporarily forgotten about - I'll get them off my chest as they come to mind. What little things annoy you - go on entertain me?
Posted by Annie Fox! at 3:21 pm 8 comments: 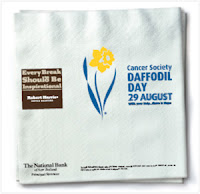 On Friday we have The Cancer Society's Daffodil Day.

Just thought I'd give you all an easy link so you can donate - or not - no pressure.
Posted by Annie Fox! at 6:30 pm 3 comments: 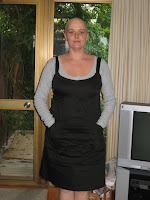 Just when I was wondering if the radiation was actually doing anything to my head, my hair fell out - so Carol got out the buzz cutters and I'm back to the commando look. I kind of look like this photo, but add on a gazillion kilograms and a big moon face and you'll get the picture - but not from me - I'm now advocating censorship.

I can tell you that cancer treatments is no beauty spa. What between the steroids, chemo, radiation and biopsies - I'm looking a little worse for wear. The only plus is the steroids make ones skin very smooth - just like a babys bottom. Fortunately for me I don't have to look at myself - tough luck for the rest of you.
Posted by Annie Fox! at 11:06 am 4 comments:

Not a bad week actually. Have finally settled in to the house both physically and mentally. And also settled into the short life mentality. Had a couple of weeks of feeling rather sorry for myself with thoughts of 'why bother' about lots of things. But had a long meeting with my Haematologist on Thursday and talked about many things including just getting on with doing whatever and not worrying about the 'why' all the time. It was a great meeting actually, just what I needed at that point and I came away feeling less like I was eminently about to kick the bucket - which of course I'm not.

So this week in the pursuit of my new philosophy called 'why not', I had a long massage at Bliss. Have decided that dying whilst having ones feet, hands or head being massaged will be the ultimate. As opposed to just holding my hand, which will quite frankly just piss me off.

Yesterday I saw The Dark Knight with big brother at the Gold Class lounge. Very good movie actually, made even better by paying $30 per ticket to have food brought to my reclining leather seat - arhhh bliss all over again. Also had a very fine lunch at One Tree Grill - well worth a visit.

Olympics has occupied some of my time, but not enjoying it as much as I thought I would, although loved the cycling street races and of course the gymnastics. I see that the Chinese have taken on those incredibly annoying slapping tube things that the bloody netball fans use here in New Zealand. Being a libertarian I'm not in to banning as a rule, but that f*ing contraption should not only be banned but come with a death sentence. It has completely ruined netball in this country and if it continues will ruin most every sport in the world. Now it's typical when you gather woman together en mass that they turn the situation into a screaming, ear-piercing, witch-like noise fest. But when men are doing the same thing, you know we are all going to hell in a hand basket.
Posted by Annie Fox! at 8:31 pm 2 comments:

Well that's it, it's all over, I've had all my treatments. So apart from the odd catchup with my Haematologist, I can try and avoid hospitals for awhile - yay!

Actually thought I would be devastated that I couldn't do anything more to abate this cancer, but actually feeling okay about it. Apparently I will feel somewhat worse over the next couple of weeks due to the radiation, but it has been easy so far - just somewhat tired.

Spoke to the Radiotherapist about what to expect as the cancer takes control. Will have headaches and some nausea and loss of motor skills. But mainly I will become more and more tired and want to sleep all the time and eventually just stay in bed - actually sounds quite peaceful.

Today I met with the lady from Mercy Hospice to discuss my care as the cancer takes hold. Very comfortable with the services they offer and good to know that there is back up for when it gets difficult. They have nice newly renovated facilities at St Mary's College on College Hill with spa pools and massage facilities - oooh.
Posted by Annie Fox! at 11:23 am 8 comments:

Knowing that you are about to die is the strangest thing to live through. All situations and conversations take on completely different meanings.

Like the other day the administrator at daystay phoned me to book two appointments with my Haematologist. One for the 14th, one for the 26th. She said she wasn't sure if I would need the second one, but we'd book it anyway as the appointments are hard to get. Now normally one wouldn't think anything of that comment, but when you are terminal your first reaction is to think, why don't I need the second appointment? Don't they think I will make it that long? Stupid I know - she wouldn't even be aware of my status - but rational thought goes out the window at moments like this.

* Wrapping up your business and personal affairs so absolutely and completely that there isn't anything really for anyone to do after you've gone. Quite satisfying I must say, but still very weird.

* Saying goodbye to friends that have visited from overseas or outside Auckland knowing that you will never see them again. And just pretending that like everything is normal - what else can one do - weird.

* Suddenly lacking sympathy towards others problems. It's so disappointing that people can't be happy with their lives - it's hard not to say "just shut up (or something stronger) and enjoy your life". And even if I did say this it wouldn't make any difference.
Posted by Annie Fox! at 7:33 pm 5 comments:

I started radiotherapy yesterday - so 2 down, 3 to go. Feel fine, not nauseous, not too tired. Procedure takes about 30 minutes from arrival to leaving.

Only side effect so far is that typing has become rather difficult, but probably more an effect of the tumour than the treatments. Obviously this makes it difficult to type this blog - but hey you'll just have to put up with mistakes and hopefully I can make myself understood.

So overall doing quite well. I had a couple of minor seizures last Saturday, the doctors upped the steroids and I've had no more since.

The house is coming into order and it's nice to be snuggled up in my room on my soft new bed.

My biggest stress is my inability to drive and the subsequent lose of my independence - it really is something I can not get use to, no matter how hard I try to rationalise it. It's also the main reason for my moods, but we battle on - or rather everyone else battles on. Am looking forward to the Olympics to keep my mind occupied.
Posted by Annie Fox! at 12:20 pm 2 comments: